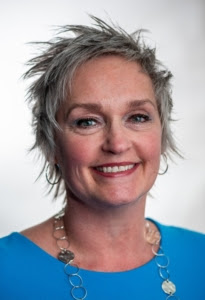 The Sun Journal has named Jody Jalbert, a 34-year veteran of the Lewiston newspaper, to the role of publisher.

The move hands Jalbert leadership of the Sun Journal and the Western Maine Weeklies.

The promotion is particularly impressive considering that Jalbert began her career more than three decades ago taking classified ads over the phone.  That was in May 1988 and it was just a part-time gig. But over the next three decades, Jalbert rose through the ranks of the newspaper’s advertising department, ultimately becoming its vice president for advertising in 2018.

Jalbert’s face is a familiar one to anyone who has worked for the newspaper at any level over the past three decades. “The Sun Journal deserves to have a local publisher,” said Lisa DeSisto, CEO of Masthead Maine, “and there’s no one better suited for this role.” Her colleagues, from the press crew to the news staff to those in leadership positions tend to agree. “Jody loves Lewiston and she loves the Sun Journal,” said Judith Meyer, executive editor of the Sun Journal and other papers. “Having her at the helm is good for our city and for our newspaper. She knows our readers very well, she knows our business and her support of our journalism is unwavering.”

“I have been fortunate to have been surrounded by mentors and co-workers who fed my curiosity and allowed me to transition, learn and grow throughout my career,” Jalbert said. “I felt it important to know and understand the process — the details of each department’s handoff to the other, from the person meeting with an advertiser, design, paper layout, pagination, plating, printing, distribution and transportation to ensure advertisers and readers get the best possible product so they continue to support the mission of our newsroom.”