Thanks to a lot of heavy lifting on the part of the Maine Press Association’s Legislative Committee, Executive Director Diane Norton, and MPA’s lobby team — Chris Jackson and Mitchell Tardy Jackson (https://www.mitchelltardyjackson.com) — we watched the resounding committee defeat of LD 876, An Act to Promote Efficiency in County and Municipal Government during an April 14 work session.

That bill proposed allowing county and municipal governments to meet the public notice requirement by merely posting on respective websites, and not, a currently stipulated, in a newspaper of general circulation. https://legislature.maine.gov/statutes/1/title1sec601.html

The Local and State Government Committee http://legislature.maine.gov/committee/#Committees/SLG voted 10-0 in favor of an ought-not-to-pass motion.

Wednesday’s vote was a relief for MPA members for many reasons, including that the publication of public notices represent a substantial revenue stream for many newspapers.

MPA board members had testified against this bill, and personally called State and Local Committee members, carefully substantiating why public notices belong in newspapers, and not just at governmental websites. Our points were these:

Bills such as 876 have been crossing committee desks for the past decade, and we are certain the debate is not over.

Which means MPA and its members must better market its public notices, and our website, mainenotices.com.

Maine is not the only state with bills that have surfaced proposing to remove public notices from newspapers. It is a critical issue for the newspaper business, and the Americas Newspaper organization recently released marketing materials focused on protecting public notices.

The materials include print, digital and social media components.

Visit here  https://newspapers.org/marketing-public-notice-ads/  to join the campaign and download ads for your own newspapers and websites. 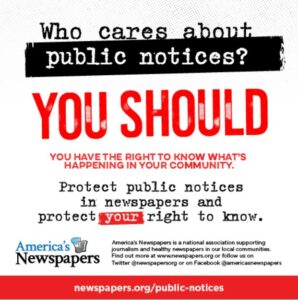