Three new members will enter the Maine Press Association Hall of Fame on October 19. Stephen Fay, Marian McCue, and the late Chris Cousins were selected by the MPA’s Hall of Fame Committee and will be inducted during the association’s annual Fall Conference at the DoubleTree by Hilton in South Portland. 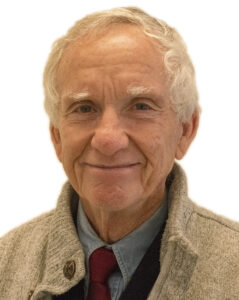 Stephen Fay started out as a news reporter in 1974. He became an editor in 1976, working in Massachusetts, Connecticut and Vermont before settling at the Ellsworth American in 1996.

Fay retired May 31 after 23 years as the managing editor of the American. Well respected by his colleagues and the community, Fay worked closely with reporters to ensure stories that were well-sourced, organized, and written in a way the average reader could understand. A story should “sing,” he was often quoted as saying. Dozens of reporters and interns have benefited from his mentorship over the years.

His self-deprecating humor shone in his long-running “Cheers” column. Purportedly a review of cheap wine, it was as likely to contain show tune lyrics and musings on married life as it was references to “aftertaste” or “hints of oak.” A brilliant writer, his column and stories had heart.

His work, and that produced by his newsroom, have won numerous state, regional and national awards over the years.

Marian McCue purchased a small fortnightly local town tabloid mailed directly to residents in 1990 and eventually turned it — with great foresight and a singular journalistic duty — into what would become arguably “the” community newspaper of record for the greater Portland area.

At the helm of what became simply The Forecaster, was a dyed-in-the-wool muckraker with a nose for scoops coupled with a devotion to truth, balance and fairness.

In 2003, knowing she was only a steward of the paper, McCue sold it to the Costello family, agreeing to stay on as editor to launch the Portland edition the same year and the Mid-Coast edition two years later.

In 2006 she handed over the reigns of the newspaper to her trusted and capable managing editor, Mo Mehlsak, but never really left journalism. Instead, McCue lent her reporting talents to many Maine newspapers on a freelance basis and for the last four and a half years has been writing a monthly column for The Forecaster focusing on issues at the State House.

Fresh out of college, Christopher Cousins went to work for the Advertiser Democrat, a weekly newspaper that served the town of South Paris where he grew up. By holding elected leaders accountable and ensuring that school and municipal officials abided by public meeting laws, he made it a better, more open place. In 2005 the Nieman Foundation agreed and awarded him a fellowship for community journalism.

No story was too big or too small, and his signature response to even the most impossible assignment was: I am not afraid. He truly wasn’t.

As a general assignment reporter for The Times Record, and later the Bangor Daily News, Cousins explained arcane education and corrections policies by talking to students and inmates about how lawmakers’ decisions changed their lives. When he moved to the State House in 2013, he made it a better place by giving as much voice to regular folks affected by politics as he did to government officials and paid political operatives.